A day late, but Happy Valentines’ Day to everyone out there.  I hope everyone had a lovely day.  Jay and I have actually only ever gotten to spend one Valentines’ Day truly together and that was in 2008 when I drove down to UNC Pembroke to surprise him and cook a Valentines’ Day pasta dinner.  In 2009, I was busy with personal crap and trying to move while in 2010, I was in London in the fam.  Jay worked til 9pm last night, so I had a low key night.  Went swimming, made myself a sandwich (which, btw, I LOVE mustards of all kinds and I tried out a new one and it was so gross that I had no choice but to stuff my face with potato chips afterward to rid myself the taste), did laundry and caught up on some TV.  I really wasn’t expecting much of any V-day fanfare since we’re going to dinner for Birth-entine’s Day tomorrow (Wed 2/16) night.  On his way to podcast, Jay had already dropped off a very sweet note to me and I was happy.  Anyway, when Jay got back from work, he gave me a dozen long stemmed yellow roses!  I love yellow and orange roses, so this was such a kick ass surprise. 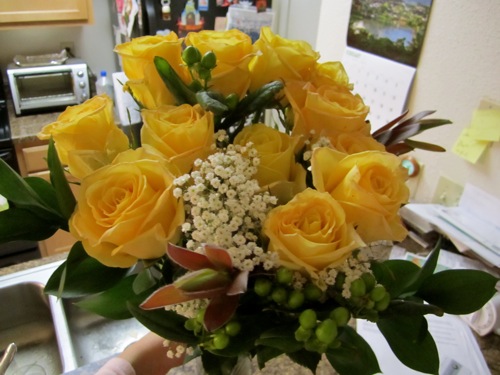 What’s actually a really funny side note (to me and Jay and probably only to me and Jay lol) – after I took this picture of the roses, Zoe jumped up on the counter and posed next to them.  I swear she’s trained for the camera now.  I couldn’t get a good shot of her and the roses without getting the messy counter in the way, so I have no proof other than my word.  Sorry!

Also, on Thursday, February 10, Jay and I went out to Cameron Bar & Grill in Cameron Village to celebrate the one year anniversary of when we got engaged.  The best part?  THEY STILL HAD SAMUEL ADAMS WINTER LAGER ON DRAFT!!  Everyone in Raleigh has switched over to Noble Pills aka Crappy Pills already!  [Bring back White Ale as the Spring Seasonal!!]  We were really bummed because when Jay proposed to me last year, he handed me a Winter Lager and an engagement ring.  We were sad that we wouldn’t get to do a toast with Winter Lager this year.  I’m going to have to try to remember to save a few of them next year to celebrate.  Obviously, we made the right choice (we’d never been to this restaurant before) because it’s probably the only place in Raleigh that still has Winter Lager left.  I think it was a sign.

Naturally, we had our toast!

The beginning of February is apparently a way more “eventful” time of year for us than I realized haha. 73 more days!

Coming soon: I want to chat The Hunger Games with people so that’s a post coming soon.